3 Ways to Tell Your U.S. Legislator
“NO REFUGEES” 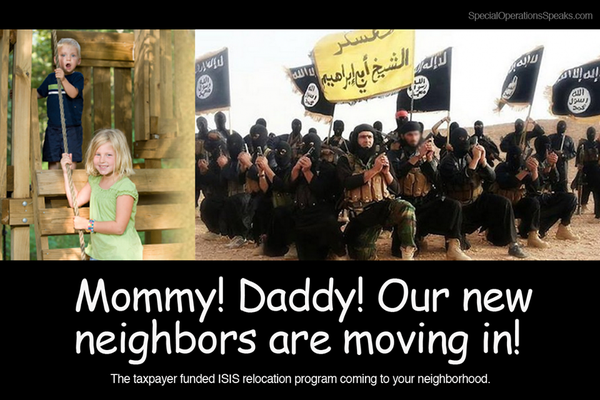 Our 300,000 grassroots advocates have been very vocal in opposing the resettlement of Syrian refugees to the U.S. We are being heard, but we must do more. President Obama has been clear that he still intends to bring hundreds of thousands of Syrian refugees to our towns and communities — irrespective of the roar of disapproval from American citizens, the strong public disapproval of over half of U.S Governors, the passage of legislation by the U.S. Congress, and — of course — even after the Paris attack, where we now know that at least one of the terrorists arrived in Europe as a Syrian refugee.

This is unacceptable and ACT for America is taking action, but we need your help.

We have three important and time-sensitive ACTION ALERTS currently underway. Please be sure to take action on each of them, and to forward this e-mail to everyone you know. This is a critical time, both in our nation and worldwide, and we need all hands on deck.

1. We are gathering tens of thousands of signatures on an Open Letter to the leadership in the House and Senate voicing strong opposition to the Obama Administration’s plans to bring Syrian refugees to the U.S. The letter will be hand-delivered to the U.S. Congress by our Director of Government Relations. If you haven’t yet added your name, please click HERE to do so.

2. We are actively supporting H.R. 3314, the Resettlement Accountability National Security Act of 2015 introduced by Rep Brian Babin (R-TX). The bill would immediately suspend the U.N.-run refugee program to provide Congress time to fully assess the national security risks and investigate its financial burden on federal, state and local taxpayers.

(Several weeks, before the Paris attack, Representative Babin spoke on the Floor of the U.S. House of Representatives about the grave threat associated with the U.N.-run refugee program. )

3. We are actively registering our opposition to any federal funding for U.S. Refugee resettlement actions to be included in the U.S. Congress’s end of year spending bill. This is our most time-sensitive activity right now! Please e-mail or call your federal legislators TODAY to express your opposition to any federal funding going to refugee resettlement.  See our petition HERE.

[NOTE: When calling your legislator’s office, it’s fine to merge Actions 2 and 3 together. Express your support for Rep. Babin’s bill and ask for cosponsorship; and express your opposition for any refugee resettlement funding in the fiscal year 2016 budget bill.]

The Paris attack is but a foreshadowing of what can and will take place in our nation soon. We cannot allow unvetted refugees from Syria (or elsewhere) to be settled in our towns and communities. This is a high priority national security matter. Please take action today and pass this information on to everyone you know.

Remember, if each of us does just a little, together we can accomplish a lot.