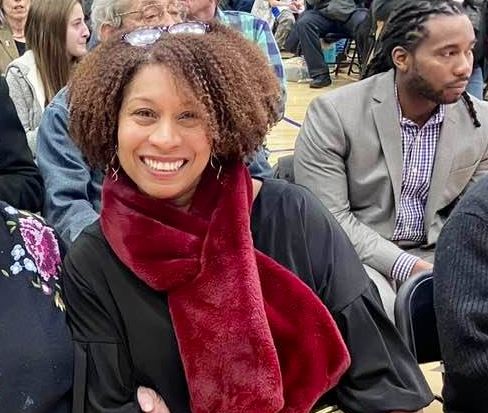 A Democratic Assembly candidate today apologized for comments she said were taken out of context about boycotting Jewish businesses in Teaneck.

The comments, captured on a short video that Alexandra Soriano-Taveras claims was taken out of context is fueling concerns that she might not be a viable candidate in a contested race for the Democratic nomination in the 37th legislative district.

“It was not my intention to offend anyone by my statement or to single out any community and for that, I am sincerely sorry, said Soriano-Taveras, the Teaneck Democratic Municipal Chair. “I am sorry for any pain or offense this video may have caused, and I renew my commitment to stand against hate and bigotry in all forms and at all times.”

Soriano-Taveras took part of a small protest last July after the Teaneck Township Council went with an all-white leadership team and rejected a bid for deputy mayor by Gervonn Romney Rice, now Soriano-Taveras’ opponent in the June primary.

In the video, she was heard to say, “Boycott those businesses, including the Dunkin’ Donuts and everything else, and we hurt them in their pockets. Who owns those businesses that we continue to support on Cedar Lane?”

“There was a call to action in Teaneck this past summer and I attended to speak up and speak out against our town leadership who once again was not listening to the voices of our community,” said Soriano-Taveras.  “In a moment of passion, I urged those in attendance not to shop in the businesses owned by town leadership, but after more thought and careful consideration of the impact on our small businesses I took no such action and led no such effort.”

She is now in a politically precarious situation.

The filing deadline to seek the Bergen County Democratic organization line has passed, and she is one of two candidates to fill two open seats.

But in the primary, she faces Romney Rice and Tenafly Council President Lauren Dayton.  They are running on an off the line slate allied with Senate candidate Valerie Vainieri Huttle.

Gordon Johnson, who is the presumptive organization Senate candidate for Loretta Weinberg’s seat, was supposed to run with Soriano-Tavares and Palisades Park Mayor Christopher Chung.

Now, Johnson is distancing himself from Soriano-Taveras.

“I am not happy that she chose those words, period,” Johnson told The Jewish Link. “I am looking for coordination and guidance, but the selection process is not done by me, so I am looking to see how they [the County Democratic Committee] are going to handle this situation.”

“Many residents in the community have expressed outrage by her comments,” he said. “Whether her comments were merely anti-small business during a pandemic or worse, potentially anti-Semitic — we need not try to figure out which one it is.”

Assemblyman Gary Schaer (D-Passaic), who represents parts of Bergen County in the legislature, told The Jewish Link that he found Soriano-Tavaras’ comments “reprehensible.”

“What she said was a not-so-veiled anti-Semitic trope. I appreciate the credentialing committee’s exploration of her qualities and everything else, but there is no candidate who can believe and say those kinds of things and still be considered for nomination,” Schaer told the newspaper.  “I am extremely distraught that this is happening, especially in a municipality like Teaneck.”

Soriano-Taveras said that he views are being misinterpreted.

“Let me be clear:  I love our Jewish community, I treasure the contributions my Jewish  neighbors make to Teaneck and to the world, and I have always and will always stand up against anti-Semitism,” she said.